NEW YORK – Police arrested two people on Sunday in connection with the stabbing of two students during a fight outside their high school in Queens last week.

Authorities charged a 16-year-old boy and a 20-year-old woman with attempted murder, the NYPD said.

The New York Post reported that a brawl broke out.

“The unknown male displayed a sharp cutting instrument and stabbed both male victims,” police said in a release.

The teen boys who were stabbed then went inside the school to get help. EMS brought them to the hospital for treatment. 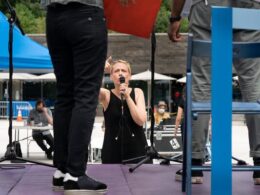