US Secretary of State Antony Blinken has told the BBC that he is convinced Ukraine can win its war with Russia.

He could not say how long the conflict would last, but insisted that Ukraine’s defeat was not inevitable.

Mr Blinken praised the “extraordinary resilience” of the Ukrainian people.

“If it’s the intention of Moscow to try somehow to topple the government and install its own puppet regime, 45 million Ukrainians are going to reject that one way or the other,” he said.

The war has already not gone as Russian President Vladimir Putin might have planned, he added.

Stiff resistance by Ukrainian forces continued to hamper Russian advances across the country on the ninth day of the invasion.

In the south, Russian forces captured areas along the Black Sea coast, and the port city of Mariupol remained surrounded. But the governor of Mykolaiv said Russian troops had been driven out of the city.

Ukraine’s second city of Kharkiv, in the north, also remained under siege.

Mr Blinken spoke to BBC diplomatic correspondent James Landale after meeting his European Union counterparts in Brussels at the start of a six-day trip to Europe.

He said the international community was committed to doing everything it could to help Ukraine and also to put “excruciating pressure on Russia to end this war of choice that Vladimir Putin started”.

Asked if he was convinced Ukraine could win, he said: “Over time, absolutely.” 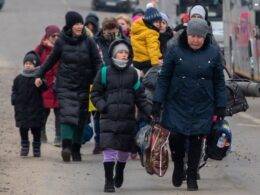